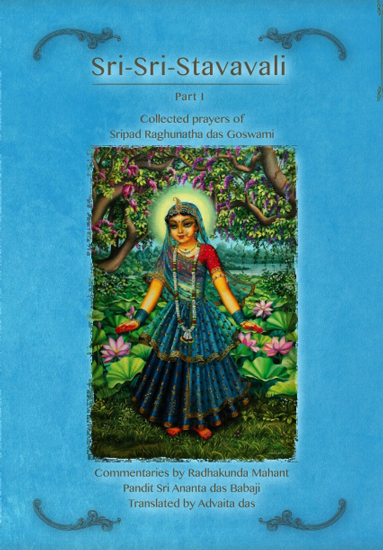 Information for orders from foreign countries:
The ordershop is in German. So if you don’t understand German please write us an e-mail to: ram@gopi.de The shipping for orders outside Germany is 7,00 € for one book. Shipping for both books, Stavavali 1+2, is 12,00 €.
We request you to pay per paypal account. Please contact Ram das per e-mail and send us the order and shipping address.

About the book:
This book is a collection of prayers by the great Vaishnava saint Sripad Raghunatha Das Goswami (1495-1574). They present a deep approach to the eternal spiritual tradition of bhakti-yoga, which is a living tradition of love to Godhead Sri Krishna and his consort Sri Radha. It is known as raganuga-bhakti, following the revelations of Sri Caitanya Mahaprabhu (1486-1534). Raghunatha das Goswami was one of the famous Six Goswamis of Vrindavan, the direct successors of Sri Caitanya Mahaprabhu.

The commentator Pandit Sri Ananta Das Babaji Maharaja is a leading religious figure in the contemporary Gaudiya Vaishnava tradition. Based at Radha-kunda, he is a respected lecturer and the author of dozens of volumes of literature.

He has initiated many devotees into the Gaudiya Vaishnava tradition, including people from Vraja, from Bengal, and from dozens of Western countries. He has been elected as the Mahanta of Radha Kunda, thus being the 34th representive of the seat of Sri Raghunatha Dasa Goswami. He is widely recognized as one of the foremost teachers of the Gaudiya Vaishnava tradition on account of his voluminous and comprehensive writings as well as due to his humility and purity of heart. 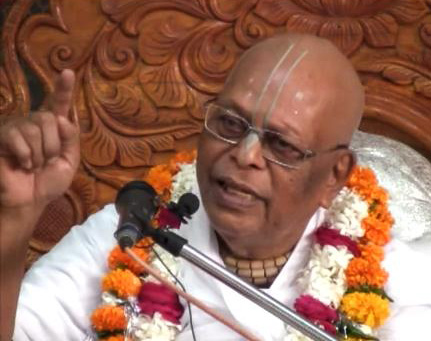 Stavamrita Kana Vyakhya:
By the grace of Sri Krishna Caitanya Mahaprabhu, Srila Raghunatha dasa Gosvami, who is the Lord’s dear associate, was able to do bhajana for a long time near Mahaprabhu’s feet. By the grace of Lord Gaura (Caitanya Mahaprabhu), an extraordinary steadiness in bhajana and an anxious loving devotion, coupled with pure dispassion, has manifested in his heart.

After Lord Gaura disappeared from this world, Sri Raghunatha dasa came to Vraja, where he planned to commit suicide, because he could not tolerate the pangs of separation anymore. But Sri Rupa and Sanatana Gosvami convinced him to give that idea up and do bhajana on the bank of Radhakunda.

From that moment on, until the end of his blessed life, Srila Raghunatha dasa Gosvami was anxiously crying out day and night for the audience of his beloved goddess Srimati Radharani on the bank of Sri Radhakunda. The nectarean Ganga-stream of his pure devotion was strengthened by monsoon showers (of mercy) from above and forcefully streamed towards the desired ocean, named Sri-Sri Radha-Madhava, thereby inundating both riverbanks on its way.
Those who discuss the topic of Sri Raghunatha dasa Gosvami’s extraordinary character will frankly admit that such anxious and intense devotion was rarely found in world history.

In his state of great devotional anxiety, he constantly showered his own body with streams of tears, while he was crying for the audience of his beloved Lord and the prayers he wrote down in this very elevated state of mind are collected in this compilation, named „Stavavali“. There is no collection of prayers found anywhere in the storehouse of Sanskrit poetry so enriched with sweet feelings, transcendental flavours and expert choice of words as this Stavavali.

Born in 1495. He lived as a householder until his age of 19. Shortly thereafter, he started to go on a pilgrimage to meet Sri Caitanya Mahaprabhu. He lived for 19 years together with Mahaprabhu in Jagannatha Puri and then for the last 41 in Vrindavana, namely in Sri Radhakunda.
He was the first spiritual mayor (mahanta) there at Sri Radhakunda and he wrote down all his books in a humble cottage near the Holy Lake.

Pandit Sri Ananta Das Babaji Maharaja was born in the district of Jharikhanda in 1927. During the earlier years of his life he held the occupation of a teacher, living with his wife and children. Having heard of the fame of Sri Kunja Bihari Das Babaji Maharaja, a renowned bhajananandi saint at Radha Kunda who was influential in the area of Jharikhanda during his householder life, in 1950 Sri Ananta Dasji decided to leave for a pilgrimage to meet the saint.

Having arrived at Radha Kunda, he met with the mahatma and received initiation into a disciplic succession descending from Sri Nityananda Prabhu and Srimati Jahnava Mata through the descendants of Sri Dhananjaya Pandit. During the following two months, Sri Kunja Bihari Das Babaji taught him the mysteries of the philosophy, worship and meditation practiced in the Gaudiya Vaishnava tradition.

At the end of this visit, despite his desire to stay at Radha Kunda, Sri Kunja Bihari Das Babaji ordered him to return back to his village to preach the message of Sri Caitanyadeva, initiating people into the practice of spiritual life. On the order of his guru, Sri Ananta Dasji returned to his family, teaching the local people and initiating some two hundred disciples over the ten following years.

Eventually he decided to renounce the world, departing for a journey to Radha Kunda, this time to stay for good. Having arrived at this holiest of all the holy places, he received the cloth of an ascetic from Sri Kunja Bihari Das Babaji. Over the decades to come, he engaged himself in a deep study of the Gaudiya canon of sacred texts, at the same time becoming more and more deeply absorbed in bhajana, both in the external and the esoteric internal methods of worship.

Order this book at www.tattva.de